Update on our day… pic.twitter.com/5Q0tIuaSqt

They were divided by fence and faith. But an open heart is far more defining. Here’s our story from this evening… https://t.co/502Z1x2Cdg

BELLEVUE, Washington — A neighboring church in Bellevue has given a local Muslim community a place to gather and pray after the community’s mosque, the Islamic Center of the Eastside, was destroyed by arson.

Last Saturday crews battled a massive fire that ripped through the Islamic Center of the Eastside. Police arrested a 37-year-old at the scene after they found him lying on the ground near the fire. He was charged with second-degree arson this week.

The Muslim community who gathered at the mosque suddenly had no place to pray. They scrambled and got access to a backroom in the Highland Community Center, but that was only temporary. Luckily, this week their neighbors stepped up.

The Bellevue Stake of the Church of Jesus Christ of Latter-day Saints has sat next door to the Islamic Center for decades. The church saw this as an opportunity to lend a hand.

This week the church offered its neighbors a large open room (a converted classroom) free of charge for families to gather and pray for as long as they need.

The church even left a welcome sign at the front door, along with two large boards covered in messages of hope from members of their congregation.

“It was a surprise, and it was very heartwarming,” Islamic Center board member Shams Pirbhai said. “That means a lot to me and to our whole congregation.”

The Islamic Center community plans to lease a larger space in the next few months, but now they don’t have to rush.

Messages of hope from Bellevue church congregation after mosque arson. They’ve given those families a free space to pray in their church. pic.twitter.com/kLlBnIxUJp

Pirbhai says their community has been blown away by the outpouring of support from families and groups around Bellevue. And this gesture holds a special place.

“They are really good neighbors and really helping us out,” Pirbhai said. “And we appreciate that.”

This is not the only time the Mormon and Muslim communities have come together.

A member of The Church of Jesus Christ of Latter-Day Saints invited a group of local Muslims to a Brisbane ward for their annual Christmas program and a tour of the church, said Ali Kadri, spokesperson for the Islamic Council of Queensland.

“They displayed amazing manners in taking the multi-faith groups on a tour of the church,” wrote Kadri in his Facebook post. He said his group attended the event representing Holland Park Mosque, which is 108 years old.

According to Kadri, members from the LDS church gave the group a room to pray in when the time came for evening prayers.

“Two faiths praying to the same God, in a different way, within [the] same building,” wrote Kadri.

Kadri told KUTV he believes after so much bad news, the world is hungry for love and respect.

“Small gestures like these should be normal and nothing special,” Kadri told KUTV. “The fact that this post has gone viral simply shows that we need to keep on doing this ’til it becomes the norm.”

Kadri says he hopes moments like these will overshadow the hate and negativity in the world. 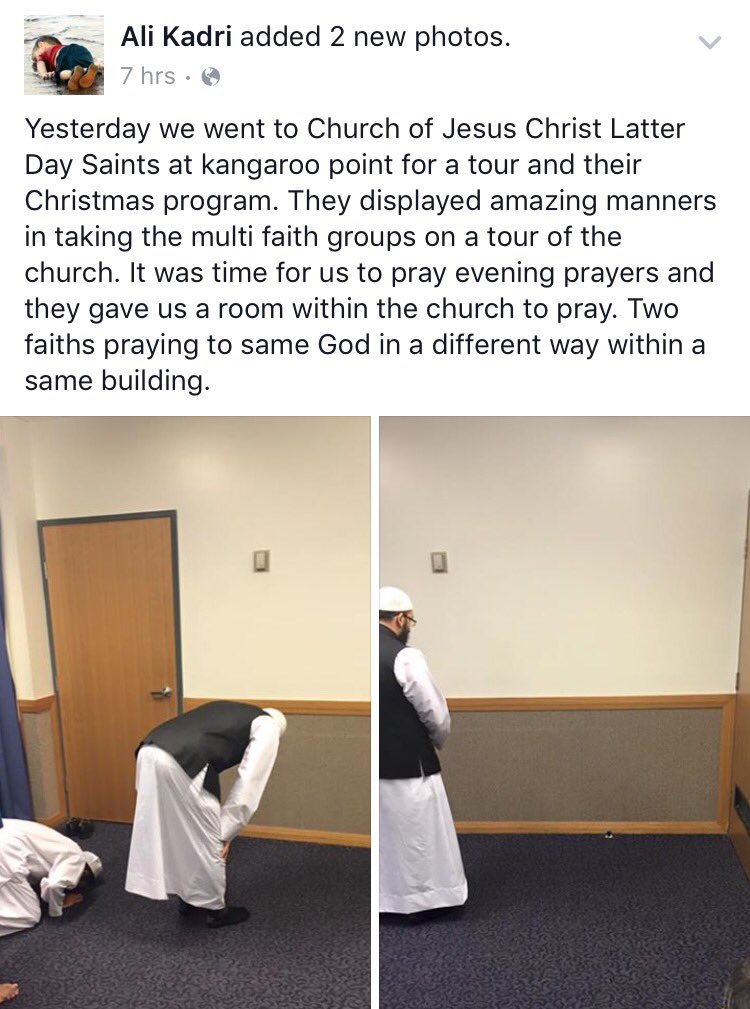 “Those who divide people will be plenty,” he said. “But it is those who unite humanity who will leave a legacy like Lincoln, Ghandhi and Mandela.”

Sue Owen, Queensland director of public affairs for the LDS church, said inviting inter-faith groups to their event was a wonderful way to connect with members of other religions.

“We really think that by joining together we will find peace,” Owen said. “We can promote peace by finding out what we have in common, rather than what sets us apart.”

Did you know these 10 facts about President Nelson?
View Post

Have you ever seen a missionary open their mission call? The air is full of excitement as people choose the locations they think this soon-to-be Sister or Elder will serve.…
View Post

Have you seen the video for Day #1 of #LightTheWorld? This cool SERVICE vending machine is guaranteed to drop your jaw . . .
View Post

Have I ever mentioned I’m really proud to be a member of The Church of Jesus Christ of Latter-Day Saints? Not many years ago, the Church somewhat behind on technological…
View Post

Okay, yes, I’m promoting my own website. Hear me out. It’s launching today. It’s called HelamanGallery.com. I’m offering FREE artwork. There are wallpapers like the ones posted above–pretty standard. But…
View Post

ART: 12th International Art Competition features recent work of 148 Latter-day Saint artists from around the world exploring the gospel message that “all are alike unto God”