President Russell M. Nelson has become the 17th President and Prophet of The Church of Jesus Christ of Latter-day Saints.

The President of the LDS Church chooses counselors to assist him in his duties. Together, the President, along with his counselors, comprise the First Presidency of The Church of Jesus Christ of Latter-day Saints.

President Nelson chose Dallin H. Oaks and Henry B. Eyring to be his counselors.

President Dieter F. Uchtdorf (who assisted President Thomas S. Monson as a counselor) remains in the Quorum of the Twelve apostles.

This change in the First Presidency is monumental in Church history.

It marks a change that hasn’t occurred in almost 5 decades.

Wikipedia has this entry about Hugh B. Brown.

After McKay died on January 18, 1970, Brown was not retained as a counselor in the First Presidency by new church president Joseph Fielding Smith. Never before in the twentieth century had a new president of the church not called a surviving member of the previous First Presidency as a counselor. This unusual move was possibly due to Brown’s support for allowing blacks to have the right to the priesthood and the fact that Brown had questioned if Smith should be appointed president due to his advanced age and poor health.[9] Brown returned as a member of the Quorum of the Twelve Apostles, where he remained until his death.

It also happened to Marion G. Romney, but the change was probably due to health-related issues as this article (again from Wikipedia) discusses below.

Romney became Second Counselor to church president Harold B. Lee, a colleague in the Church Welfare program, in 1972.

Following Lee’s death the following year, Spencer W. Kimball became the church president and he retained Romney as the Second Counselor. As the First Presidency, Kimball, Tanner, and Romney announced the 1978 Revelation on Priesthood, canonized as “Official Declaration 2” in the Doctrine and Covenants.

When Kimball, Tanner, and Romney all aged and developed health problems at similar rates, Gordon B. Hinckley was added as an additional counselor in 1981. Upon Tanner’s death in 1982, Romney became First Counselor and Hinckley the Second Counselor, though Romney was relatively inactive in his position due to poor health. When Kimball died in 1985, press reports indicated that Romney had not been seen in public for many months.[citation needed]Ezra Taft Benson, who had been President of the Quorum of the Twelve Apostles, then became the president and named Hinckley as First Counselor, with Thomas S. Monson as Second Counselor. Romney, as the apostle with the second-longest seniority in the church, became the quorum president. However, “because President Romney’s health [kept] him from taking an active part in Church administration,” Howard W. Hunter, the next in seniority, served as acting president.[2] 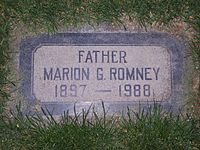 Romney died from natural causes at his home in Salt Lake City at age 90. He served 47 years as a church general authority. Funeral services were held at the Salt Lake Tabernacle on May 23, 1988, presided over by Benson. Romney was buried at Wasatch Lawn Memorial Park in Salt Lake City,[3] beside his wife, approximately 10 years after her death. The Deseret News Church Almanac remembered him as a “renowned Church Welfare pioneer and Book of Mormon scholar”.[citation needed]You can view all the counselors in the First Presidency not retained upon reorganization below:

Another interesting fact—did you realize there have also been members of the First Presidency who have not been apostles? Again, from Wikipedia.

Let’s wrap this up with a great link to a visual showing the chronology of the First Presidency.

All of these men are stalwart disciples and apostles of the Lord Jesus Christ.

Now that tithing settlement can be held as early as October 15, we hope the bishop can actually enjoy Christmas this year. That still leaves him the responsibility to get every…
View Post

Big news! You better sit down for this one…ok…are you ready? LDS Maps just got an upgrade! Ok…ok…so that news isn’t too exciting and many of you don’t even know…
View Post

Did you know these 10 facts about President Nelson?
View Post

Russell M. Nelson  Throughout the world, February 14 is celebrated as Valentine’s Day. For those with spouses or significant others, it can be a wonderful day to celebrate and renew…
View Post

Previously I posted about using the excellent, free, “Getting Things Done” tool, Asana, in your ward or other church-related organization. Today, I interviewed Bishops & MLH-contributors Jeff VanDrimmelen and Kurt Francom…
View Post

Here’s how we’ve organized our Elders Quorum: We have a Google Sites site, and it links to all the important documents people might need.   After the home page, we have…
View Post

VIDEO: The Temptations of Jesus | Messages of Christ