When I heard his reply, I cringed inside. This experienced returned missionary missed an opportunity to share the gospel. If he would have instead responded with, “Oh, well, I was a missionary for the Mormon church in Michigan for two years”, it may have led the non-member to ask, “What’s that?”.

Unfortunately, this is not the only experience I have had with this situation. I have heard many returned missionaries describe their two year mission as simply “living somewhere for two years”. It is a missed opportunity.

Be a Missionary by Using Mormon Words

I later shared this experience with my ward one Sunday as I taught a lesson about missionary work. I encouraged the congregation to be open about their LDS lifestyle so that those interested to learn more would have the opportunity to ask questions. A few weeks after this lesson, a member of my ward approached me privately at church and shared with me an experience he had at work. He had dressed up that day because he was planning on attending the temple after work. A co-worker jokingly teased him about being so dressed up for work since it was a semi-casual workplace. He jumped at the opportunity to tell his co-worker that he had plans to attend the Mormon temple later that day. Nothing came of the conversation (that I know of) but this member felt honored to share his testimony simply by what he was wearing.

Recently, I was pleased to find a missionary resource called The Power of Everyday Missionaries by one of my favorite authors, Clayton Christensen. I encourage you to take time to peruse the website and learn from his experience. On the website, he shares the same perspective of using Mormon words in your everyday vocabulary so more people will be likely to ask you questions about the church. 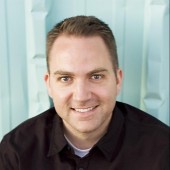 Kurt is the mind behind Leading LDS, a blog about enhancing individual LDS leadership. He and his wife are proud parents. Currently serving as: Counselor in the Stake Presidency

Meet THE CRAFTSMAN: Danny Sorenson is the latest story in the MEET THE MORMONS series

VIDEO: These images of missionaries returning on a plane will give you the chills!

VIDEO: The Savior Heals All Wounds